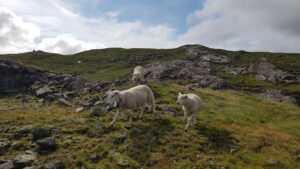 The main source of GHG emission in lamb meat production comes from enteric methane (CH4) emission produced as a by-product in the non-aerobic fermentation of feed. Other countries have shown that enteric CH4 emission is heritable in sheep and in cattle. Breeding is thus a mitigation option and including CH4 emission as a trait in the breeding goal will result in a cumulative and permanent reduction in the national GHG emission from lamb meat production. Inclusion of CH4 reduction into the breeding goal requires knowledge of correlations to other traits in the genetic evaluation. The aim of the current study was to investigate the heritability of CH4 in Norwegian White sheep and to compute the genetic correlations to direct and maternal genetic effect of 42-day and 140-day weights. 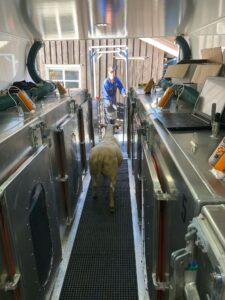 The PAC equipment inside the truck. An ewe is getting treat to exit after measurement. Photo: Lars-Bjarne Linneflaatten, © NSG

Fifty-minute CH4 emissions were measured in portable accumulation chambers (PAC) on 4,534 Norwegian White mixed age ewes from 44 breeding flocks and expressed as grams per hour. Liveweight at PAC measurement was also recorded. Ten years of observations for the lamb growth traits 42-day and 140-day weights were extracted from the Sheep Recording Database along with the corresponding pedigrees. Heritabilities and direct and maternal genetic correlations were estimated for liveweight adjusted CH4 and the lamb growth traits. The heritability for liveweight adjusted CH4 was 0.17, and heritabilities for the growth traits were in the range 0.07 to 0.13. The genetic correlation between liveweight adjusted CH4 and maternal genetic effect of 42-day weight was 0.32 and significantly different from zero, while other correlations between CH4 and growth were non-significant. 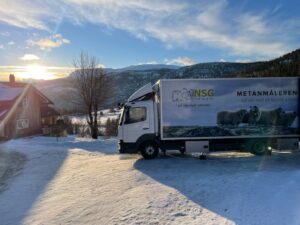 The truck used for the measurements. Photo: Martin Gløersen, © NSG

Based on this study, including liveweight adjusted PAC CH4 emission into the breeding goal for Norwegian White sheep imply a reduction in the CH4 conversion factor Ym (% of gross energy intake partitioned into CH4) and as such also the national emissions, given no additional feed stuffs are grown or imported.  However, based on the antagonistic genetic correlations to maternal genetic effect of 42-day weight selection solely for reduced methane emission would result in a decrease in the maternal effect on lamb growth during main suckling period. This antagonistic relation should therefore be handled carefully when including methane emission in the breeding goal via appropriate weighting in the overall selection index.