Using a gene flow model, it was investigated whether the Irish sheep population would benefit from elite maternal germplasm sourced from Irish or New Zealand flocks, and if so, how best to incorporate that germplasm to maximise genetic gain. The model quantified the genetic improvement, in monetary terms, across future generations of commercial sheep as a consequence of the implementation of alternative breeding strategies. Various subpopulations were modelled reflecting the current structure of the Irish sheep population. A base scenario was modelled assuming no change to current breeding strategies. A progressive scenario modelled the impact of the shift of market share away from conservative breeders towards progressive breeders. A New Zealand scenario investigated the impact of importing New Zealand rams every 5 years that were elite for maternal genetic merit. The greatest monetary gain was achieved by the progressive Irish scenario, which had the potential for a four-fold increase in monetary gain compared to the base scenario. For the strategy that imported elite New Zealand germplasm, the benefit was almost 3 times greater than the base scenario. The long-term impact of the importing elite New Zealand germplasm was hampered by the foreign population having a poor long-term genetic trend and therefore benefits quickly plateau. Results demonstrate the potential to accelerate the benefit to the Irish sheep industry without the use of imported germplasm, but through the strategic use of progressive domestic genetics, i.e. shift market share away from conservative breeders towards progressive breeders. However, the exploitation of imported germplasm, such as elite New Zealand rams, may play a key role in triggering this shift. The gene flow model now acts as a template for other scenarios or even industries to quantify their genetic and monetary benefits from importation strategies regardless of country or species. 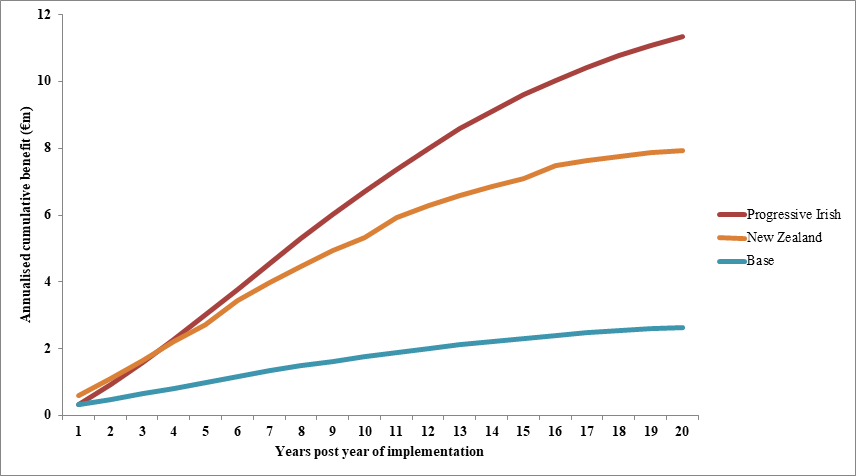 Figure 1: Annualised cumulative benefit (expressed in € millions) from year 1 to 20 post-implementation of the base, the Progressive Irish and the New Zealand scenarios.