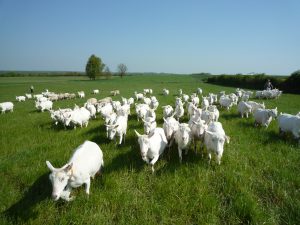 In the WP6 of Smarter, the ambition is to study the implementation of an international genomic evaluation in dairy goats. The first studies focused on the analysis of available genomic data shared between 4 countries (Canada, France, Italy, Switzerland) on the two main dairy goat breeds (Alpine and Saanen) in order to estimate genetic connections between populations. After control quality and filtering steps, 9 855 genotyped animals (6 102 Alpine and 3 753 Saanen) on 50 678 SNPs were available. In Alpine, genotypes data were distributed as follows: 13% from Canada, 49% from France, 17% from Italy and 21% from Switzerland. In Saanen, the distribution of genotypes was 24% from Canada, 54% from France, 9% from Italy and 13% from Switzerland. We observed uneven distribution of genotypes over time (between 1997 and 2019), with many females genotyped born between 2008-2009 in France (from a QTL experiment), first genotyped Italian animals born in 2010 only, and in Switzerland genotyped animals were born recently between 2002 and 2013. First populational statistical analyses have been carried out from the genotype data (consistency of gametic phase, PCA, MAF and linkage disequilibrium analyses, Admixture, …) to characterize genetic similarity between the eight populations (4 countries x 2 breeds). The results indicate that consistency of gametic phase between France and Italy remains high (>0.7) even for large distances (SNP more than 500kb away); lowest consistencies were observed when comparing Canadian and European genotypes dropping below 0.1 for SNP more than 500kb away for both breeds. Based on PCA results, the Alpine and Saanen are quite different within and between countries with two main groups (Canada versus European), genotypes of French and Italian animals were closed (cf. Figure). LD at 50kb is higher in Canada (0.14 in Alpine and 0.16 in Saanen) than in France (0.13 in both breeds) and lower and quite similar in Italy and Switzerland (0.11). These results are in accordance with weak animal exchanges observed between countries based on pedigrees. France exports animals to all partner countries, but does not import any animals. Canada and Switzerland have imported some animals mainly from France, while Italy has imported more, mainly from France but also from Switzerland. The second study, currently underway, concerns the implementation of multi-country genomic evaluation models (estimation of genetic parameters and genetic correlations). These models are being studied on traits common to the different countries (milk production and type traits).

This work is carried out thanks to data provided by the Smarter project partners in Italy, Canada, Switzerland and France.