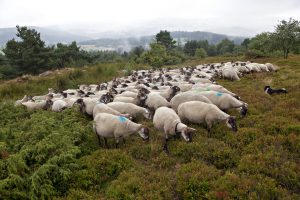 Genetic selection focused purely on production traits has proven very successful in improving the productive performance of livestock. However, heightened environmental and infectious disease challenges have raised the need to also improve the resilience of animals to such external stressors, as well as their efficiency in utilizing available resources. A better understanding of the relationship between efficiency and production and health traits is needed to properly account for it in breeding programs and to produce animals that can maintain high production performance in a range of environmental conditions with minimal environmental footprint. The aim of this study was to perform a meta-analysis of genetic parameters for production, efficiency and health traits in sheep and goats. The dataset comprised 963 estimates of heritability and 572 genetic correlations collated from 162 published studies. A three level meta-analysis model was fitted. Pooled heritability estimates for milk production traits ranged between 0.27±0.03 and 0.48±0.13 in dairy goats and between 0.21±0.06 and 0.33±0.07 in dairy sheep. In meat sheep, the heritability of efficiency traits ranged from 0.09±0.02 (prolificacy) up to 0.32±0.14 (residual feed intake). For health traits pooled heritability was 0.07±0.01 (faecal egg count – FEC) and 0.21±0.01 (somatic cell score – SCS) in dairy goats and 0.14±0.04 (FEC) and 0.13±0.02 (SCS) in dairy sheep. In meat sheep, the heritability of disease resistance and survival traits ranged between 0.07±0.02 (mastitis) and 0.50±0.10 (breech strike). Pooled estimates of genetic correlations between resilience and efficiency traits in dairy goats were not significantly different from zero with the exception of SCS and fat content (-0.19±0.01). In dairy sheep only the unfavourable genetic correlation between SCS and protein content (0.12±0.03) was statistically significant. In meat sheep only the correlations between growth and FEC (-0.28±0.11) as well as between growth and dagginess (-0.33±0.13) were statistically significant and favourable. Results of this meta-analysis provide evidence of genetic antagonism between production and health in dairy sheep and goats. This was not observed in meat sheep where most of the pooled estimates had high standard errors and were nonsignificant. Based on the obtained results, it seems feasible to simultaneously improve efficiency and health in addition to production by including the different types of traits in the breeding goal. However, a better understanding of potential trade-offs between these traits would be beneficial. Particularly more studies focused on reproduction and resilience traits linked to the animal’s multitrait response to challenges are required. The study was submitted for publication to Animal.