Resilience is the ability of a goat to cope with environmental disturbances, such as pathogens or feed restriction. Genetic selection on resilience remains a challenge. Because resilience translates into enhanced functional longevity, we created two lines of Alpine goats using hyper-selected bucks with the most extreme estimated breeding values for functional longevity (high-LGV and low_LGV). In the present study, we explored the evolution of metabolic pathways related with lipomobilisation during feed restriction among goats selected for extreme functional longevity. Accordingly, an experiment was carried out in which time-series measurements of 14 milk metabolites were made in dairy goats exposed to an underfeeding challenge during early lactation. The aim of this study was to validate the use of milk metabolites as an indicator of resilience. The first step of the article was to compare survival and resilience indicators of the two lines of goats. Weight and growth during the first year of life were similar in both goat lines. In contrast, the low_LGV goats had a lower weight during the beginning of first lactation than high_LGV goats. The milk fat to protein ratio was also significantly higher in low_LGV goats during first lactation. The overall survival (from birth to death) of high_LGV goats was significantly greater than low_LGV goats. The line effect was not constant over time: no significant effect was found during the first year of life and the difference emerged after first kidding. These results support the hypothesis that the two lines of goats present different resilience levels and that this may be linked to different resource allocation profiles between lines.  We characterized the 14 milk metabolite profiles upon challenge using a functional PCA (fPCA) for each milk metabolite. The daily concentration of each metabolite during the whole challenge period was included in the fPCA. Each individual milk metabolite curve was then characterized by a PCscore for each component. Between 2 and 4 components were required to explain at least 80% of variation resulting in 50 variables per goats. We then used Sparse PLS-Discriminant Analysis (sPLS-DA) to evaluate the ability of milk metabolites to distinguish the longevity lines. The method integrated a continuous data matrix comprising the individual PCscores and a categorical outcome variable: the line of the goat (high/low_LGV). The balanced error rate estimated for the model was 30.2% (respectively 30.0 and 30.3 for low_LGV and high_LGV lines). As shown in Figure 1 the most discriminating parameters between lines were Chol3, Gal2, LDH4, and TAG3. These results indicate that differences in functional longevity, which are seemingly due to differences in resilience, can be detected from milk metabolite responses to a short-term underfeeding challenge. Further, this preliminary analysis suggests that the physiological mechanisms underpinning differences in resilience are related in part to lipid metabolism. 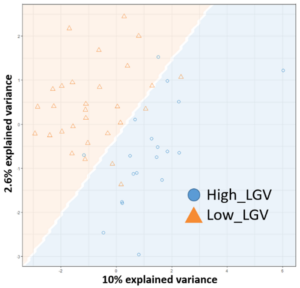 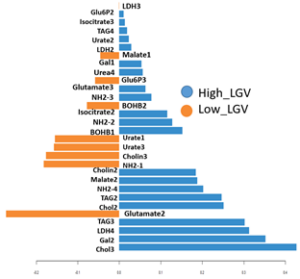