Selection on functional longevity in a commercial population translates into significant differences in longevity, and resilience, in a common farm environment 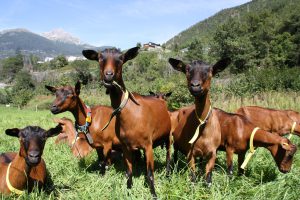 The aim of the first article of Marie Ithurbide’s PhD (submitted to JDS in august 2021) was to validate the use of functional longevity as an indicator of resilience for selection. To address this question, we created 2 divergent lines of Alpine goats using artificially inseminated bucks with extreme estimated breeding values for functional longevity. A total of 440 goats, 228 in high_LGV and 221 in low_LGV lines, were bred and monitored for 4 years.  Health treatments, serum immunoglobulin G concentration in early life, kidding, age and reason of culling were systematically noted. Weight and morphology were monitored. Weight and growth during the first year of life were similar in both goat lines. In contrast, the low longevity goats (low_LGV) received slightly more treatments and had a lower weight during the beginning of first lactation than high longevity goats (high_LGV). The fat to protein ratio was also significantly higher in low_LGV goats during first lactation.  A multivariable Cox regression was fitted to the data in order to decipher survival at different stage of life in the two lines. The overall survival of high_LGV goats was significantly better than low_LGV goats (hazard ratio=0.63, CI=0.47;0.86) even after we implemented treatment, growth, serum immunoglobulin concentration during first days of life, difficult kidding and year effect in the model. The line effect was not constant over time: no significant effect was found during the first year and the difference was built after first kidding. This result provides initial evidence that survival at early stage of life or during productive life are under different genetic regulation. Altogether, this monitoring of the goat lines indicated that functional longevity based selection helps to improve resilience by improving survival and reducing the use health treatments and mitigating some indicators of fat mobilization during early lactation. As further characterization of resilience in the longevity line goats, we will analyse their response trajectories to nutritional and infection challenges.