Overall, 277 Romane male lambs were reared between 2018 and 2020, and fed concentrates. Average Daily Feed Intakes (ADFI) of lambs were computed from records between 12 and 18 weeks of age. Rumen fluids were sampled at the end of ADFI recording period to be sequenced for the 16S rRNA gene.

Three approaches were carried out to predict phenotypic ADFI: sparse Partial Least Squares (sPLSR), support vector (SVR) and random forest (RFR) regressions. Different predictor sets were considered: animal traits (body weights, growth traits and body composition), or rumen microbiota compositions (adjusted and transformed abundances). Those two predictor sets were used separately or combined. Successively, animals of two different years were used as training/validation sets. Lambs of the remaining year were used as a testing set in order to assess the accuracy of predictions. Estimated Breeding Values (EBVs) of predicted and actual ADFI were computed with PEST and a pedigree of 4,102 animals (including 277 records). Depending on the year considered as the “testing set”, predicted ADFI represented 73 to 101 of the 277 records used for the genetic evaluation.

When it comes to predict ADFI phenotypes, there was no significant difference between sPLSR, SVR and RFR accuracies whatever the testing set or the predictors. Correlations between actual and predicted ADFI were always lower with microbiota predictors only (RPearson ranging between -0.11 and 0.35), compared to predictions with animal traits (0.71 to 0.82). Combining animal traits and 16S data together as predictors never improved correlations significantly. High correlations could be achieved between EBVs of actual ADFI and predictions from animal traits (RPearson ranging between 0.62 to 0.86). With one testing set, SVR underperformed compared to sPLSR, while RFR had intermediate values.

Our results do not advocate for the use of metabarcoding data to predict feed intake phenotypes. However, the microbiota composition could be more relevant when one is trying to predict feed efficiency. Correlations between EBVs of predicted and actual ADFI suggests that predictions could be used for genetic selection. Further research in the phenotyping strategy should be carried out such as the number of records, or whether contemporaneous animals should be present in the testing and training sets. 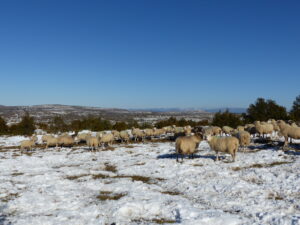